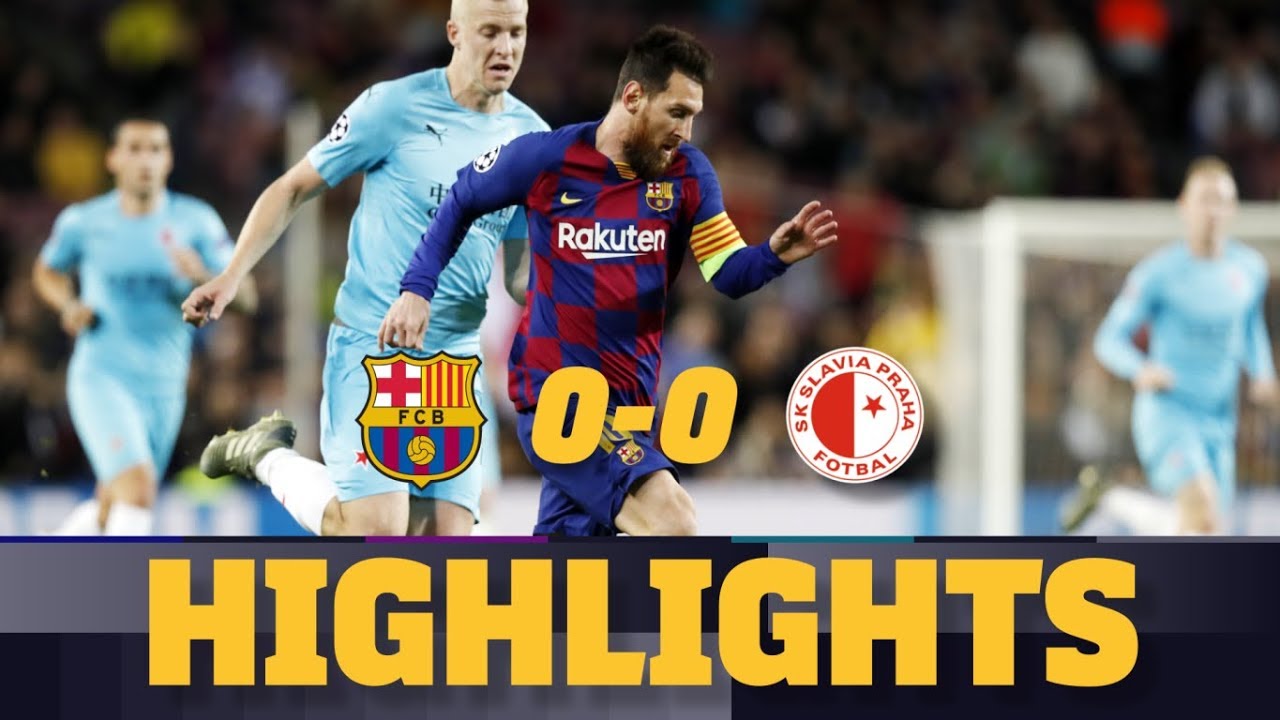 Bthe Borussia v Inter game later today, but a frustrating 0-0 draw at home to Slavia Prague means that rather than being virtually assured of a place in the last sixteen, there is still work to be done in the final fixtures.

Just like the first meeting in Prague, where Barça struggled to come away with a win, the game was played at a relentless pace. The Czechs never give up a ball as lost and are not afraid to send men forward, and do all of that at an electric pace

Meanwhile, Barça never quite managed to get into their comfort zone and although both sides had plenty of chances, and both had goals discounted for offside, it all ended without score.

Held in Czech
Lenglet cleared one killer pass, Slavia’s own Masopust got in the way of another that could have seen the visitors score first. There was no shortage of danger for the Barça defence to deal with.

But when it came down to pure footballing ability, Barça were well on top. Leo Messi was his usual majestic self, and the story of the half would have been very different had one particularly silky piece of football not ended with the ball rattling off the post.

Messi’s misfortune with the woodwork – we had enough of that last season.

With Jordi Alba not returning to the fray due to hamstring trouble, further frustration came after the break when Arturo Vidal had a goal wiped out for offside. It was the closest of close calls, but VAR did show that Messi, who gave the assist was little more than a leg-width ahead of his marker.

Out of luck
Barça kept pressing, but Slavia were succeeding where so many supposedly more hallowed names in the football world had failed and were keeping the onslaught at bay. The last time Messi went for two consecutive UCL games without scoring was in 2015.

That makes Slavia’s achievement of keeping the Argentinian at bay for 180 minutes all the more commendable. Not many teams can say they have done that – especially considering that Messi had no fewer than eight shots on goal. It was not for want of trying, that’s for sure.

Ondrej Kolar was one of the many reasons. The goalkeeper was having a fine evening, particularly when denying Messi from point-blank range off a simply exquisite Ansu Fati assist.

Right at the end, Vidal could have clinched it. But was a fraction of a second too late. That was the story of today’s game. So near but so far.

But a point is still a point. And this is the Champions League. We’re still unbeaten in the competition, and qualification for the knockout stages is still VERY much in our hands.

The game by the numbers
3: The number of yellow cards Gerard Piqué has seen in the Champions League so far. His 14th minute booking means he will miss the game against Borussia Dortmund.

5: The number of Czech teams that have now played at the Camp Nou. Barça had hosted Slavia before, but before the stadium was built. The previous visitors were Hradec Králové, Dukla Prague, Sparta Prague and Viktoria Plzeň. This wasn’t the first time a Czech side has come away smiling. Dukla and Sparta both won games here in the 1980s.

549: The number of competitive games Sergio Busquets has played for Barça, equalling Migueli in fifth place in the all-time list. Amazingly, the top five all played together, which goes to show just what an incredible side we have had in recent years.

34: The number of games that Barça have gone without defeat at home in the Champions League (W30 D4 L0), a competition record and still counting!

13: The number of games at Camp Nou Lionel Messi had gone in the competition either scoring or assisting. This was the first time he failed to do either since the game with Celtic in October 2012.

12: The number of games since Barça last failed to score at home in the Champions League. The last time was in the quarter final against Juventus in 2017, while in the group stage the run dates all the way back to Benfica in 2012.. The last we failed to score in any game at the Camp Nou was against Getafe in February of last year.

0: Slavia had chances, but perhaps surprisingly, not one of them actually involved a shot on target. Borussia Mönchengladbach in December 2016 was the last team Barça ‘shut out’ in that category.
—-
FC Barcelona on Social Media
Subscribe to our official channel
Site:
Facebook:
Instagram:
Twitter:
Viber: