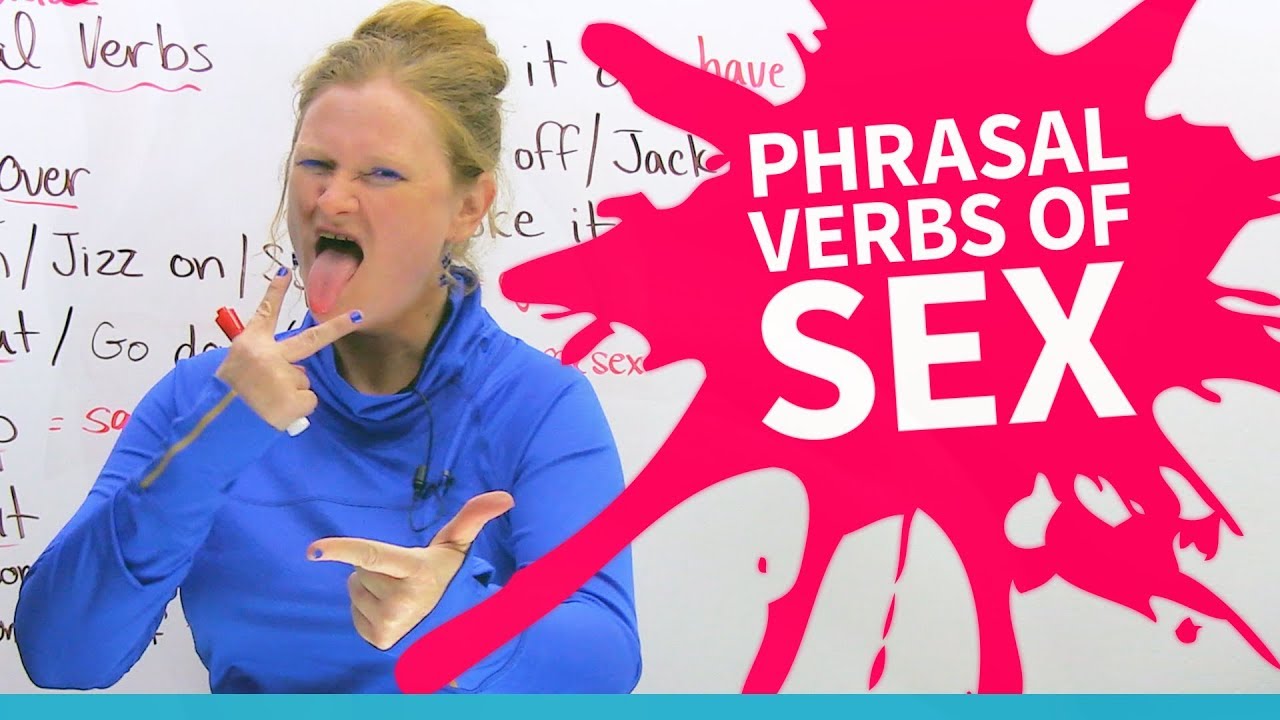 Hi, guys. I’m Ronnie. I’m going to teach you some dreaded phrasal verbs. Hmm… I know that learning English is difficult, and phrasal verbs are very difficult because they just don’t make sense. Okay? So, when you look at a verb in English, you have, like, for example: “calm” or “jack” or “beat”, and then there’s a pronoun with it, it gets very confusing. So, just a little warning, here, people, if you are not mature enough to watch this-no matter your age-I suggest you turn it off or don’t share it. Yeah? How about that as an idea? If you’re offended by phrasal verbs of a sexual nature, don’t share the video. Mm-hmm. Turn it off, watch another video. Watch a different channel. Do what you do.

So, I’m going to teach you phrasal verbs Ronnie style because they’re about sex – oh yeah. So, sexual phrasal verbs. This is what makes me laugh all the time. Every day at my work and in my house… Not my house. In my apartment I have an elevator and there is a voice in the elevator and the elevator says: “Going down”, hee-hee-hee, I every day giggle, and I say: “I wish”, and other people look at me and go: “Why is this crazy lady laughing at the elevator because it says ‘Going down’?” What these people don’t realize, because maybe they don’t have a hilarious sense of humour or they don’t know the phrasal verb to go down on someone – “going down” means to have oral sex with someone, so when the elevator opens up and a person’s voice goes: “Going down”, I’m like: “Okay, in the elevator? Cool.”

So, first of all, phrasal verbs are always a verb and a preposition. So, prepositions are things like: “over”, “in”, “on”, “out”, “down”, “up”, “out”. So, these prepositions with the verb together will have a completely different meaning than if you just have one verb. So, for example, the verb “eat” we know, but when I put it with “eat out”, you guys think: “Oh, hey, yeah, guess what? I went to a restaurant last night and I ate out”, and I die, I just laugh because, ladies and gentlemen, if you “eat out” or “eat someone out” it means you have, or are having, or had oral sex again. So: “go down” and “eat out” both mean you’re having oral sex. So, this is why I laugh all the time. People think I’m in a good mood. I just think people say things that are funny. So, I’m going to teach you some sexual phrasal verbs.

First one: “bend over”. It actually sounds like a person’s name in English. Does anybody know anybody named: “Ben Dover”? If anyone’s a fan of The Simpsons, Bart Simpson will call a bar and say: “Uh, is Ben Dover there, please? Can somebody Ben Dover? Can somebody get my Ben Dover?” “Bend over” basically means that you put your body like this and you stick your bum in the air, and you’re having sex like that. Good job, I think you can imagine what happens next if you bend over. If your name is Ben Dover, your parents are funny and probably you might want to change your name. Maybe Benny Dover? Nah, good luck with that. Benjamin Dover? Better.

As I said before, when people tell me that they are going to eat out tonight, I think that’s a lot of information that I don’t need to know. They mean they’re going to a restaurant, but in my brain and I’m sure a lot of other people’s brains, “eat out” means oral sex. So does “go down”, going down. We can also say “on someone”. So you can say: “I was going down on my girlfriend”, “I was going down on my boyfriend”, that means that you’re having oral sex.

42 thoughts on “Phrasal Verbs of SEX”