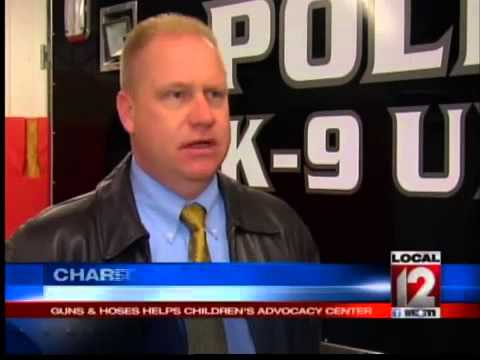 FLORENCE, Ind. (Deb Dixon) — The Guns Hoses Charity Boxing event is about much more than just punches.Past pictures of Guns and Hoses looks like the real deal. The exchange of sometimes knock out blows. It has participants who volunteer for the event working out on their own time. Tim Hamer from the Lawrenceburg Fire Department said, Get two guys all that testosterone it can get heated! That’s part of it. But there is something else. Money raised from Guns and Hoses helps pay for the nonprofit Children’s Advocacy Center of southeastern Indiana. A place for forensic interviews in child abuse and neglect cases. Sgt. Tom Baxter of the Indiana State Police said, The Guns and Hoses event has served as a very big contributor to the annual budget and it has turned out to be more than we ever thought it would be. Even though the center serves ten counties in Indiana, departments from Ohio and Kentucky are on the ropes for the event. It surprises a lot of people, but law enforcement officers and firefighters say they get in the business for a reason, and that is to serve. For Lawrenceburg Officer Troy Cochran it’s about family too. Father Tom Cochran investigated child abuse cases when he was with Lawrenceburg police. He was killed in 2005. On a run, his patrol car hit ice and went into a cement wall . Officer Troy Cochran tells us, He was huge on investigations that involved children and this is king of my own way of giving back. For the first time there is a female match. It will be Colerain vs Gaming Commission. The three, one minute round fights will be judged by real boxing officials.Officer Roger Houston of the Lawrenceburg Police Department said, People get knocked out. You got head gear, you have I believe they are 16 ounce gloves. Plenty of protection but you still get rung pretty good. Taking a TKO for children! Tickets to Saturday night’s event are nearly sold out. CLICK HERE for more information and ticket sales.Follow Deborah Dixon on Twitter @crimestopperdeb and LIKE her on Facebook